FREE Shipping on AUS orders over $99*

Breastfeeding is one of the most valuable preventative health measures available to us as a society, with many well documented benefits for both mother and child. The health benefits for children extend well beyond the newborn stage, with links to reduced obesity and reduced rates of type 1 and type 2 diabetes, as well as improved cognitive development.

Breastfeeding is good for mum too. It helps the uterous return to pre-pregnancy state and reduces the incidence of breast and ovarian cancers in women to name a few.

Improving breastfeeding rates is a long term health strategy that doesn't win short term votes, so it is not prioritised by the government beyond publishing catchy sound bites like the 'National Australian Breastfeeding Strategy'.

Interested in supporting Breastfeeding Mums in Australia? The Federal Election is coming up, so now is a great time to raise awareness of this issue.

Let's explore the current state of Breastfeeding in Australia a little more.

What are the Benefits of Breastfeeding?

Extensive research on breastfeeding has identified health, nutritional and developmental benefits for both infant and mother as well as further benefits in later life. These include protection against infectious diseases including gastrointestinal illness (diarrhea and vomiting), respiratory tract infections and ear infections. It also protects against inflammatory issues such as allergies and asthma. Longer term benefits include protection against obesity and reduced risk of type 1 and type 2 diabeties.

For Mum the benefits include reduced risk of breast and ovarian cancer. (1)

Is Australia Supportive for Breastfeeding Mothers?

The Australian Heath Department does not effectively monitor breastfeeding rates in Australia on a regular basis, and as we know, what doesn't get measured, doesn't get managed.

The breastfeeding key findings from national health survey data shows that from 2014-2015 to 2017-2018, breastfeeding rates have remained about the same.

What is the Australian National Breastfeeding Strategy?

The key stated goal of the 'Australian National Breastfeeding Strategy: 2019 and beyond' is to increase exclusive breastfeeding rates at 6 months from 29% in 2019 to 40% in 2022, and to 50% in 2025. These pie in the sky numbers are impressive, but there is no concrete action or path to achieve these numbers.

Unfortunately it is very light on detail within the action points. There are no clear measurable expectations, and no way of working out whether the strategy is successful (since we do not have data available to measure exclusive breastfeeding rates every year).

The last Australian National Breastfeeding Strategy was released in 2015 and has had zero impact on breastfeeding rates in Australia as at 2017-18 when the rates were last measured. (see   National strategy to increase breastfeeding).

What are the Australian Infant Feeding Guidelines?

The Australian Infant Feeding Guidelines recommend exclusive breastfeeding until around 6 months of age when solid foods are introduced. The guidelines also recommend that breastfeeding be continued until 12 months of age and beyond, ‘for as long as the mother and child desire’ (National Health and Medical Research Council (NHMRC) 2012). (1)

It is worth noting that this includes expressed milk. 'Exclusive breastfeeding' means only breastmilk is given to the baby, whether directly from the breast, or from a bottle. It includes donor breastmilk.

What is the World Breastfeeding Trends initiative (WBTi)?

The WBTi assesses whether a country has implemented policies and procedures recommended by the World Health Organization (WHO). It provides a benchmark for countries to improve against.

In 2018 Australia received an overall report card of just 25.5 out of 100, compared to a world average of 50 out of 100 (100 out of 100 being 100% implementation of recommended policies and proceedures to support breastfeeding). 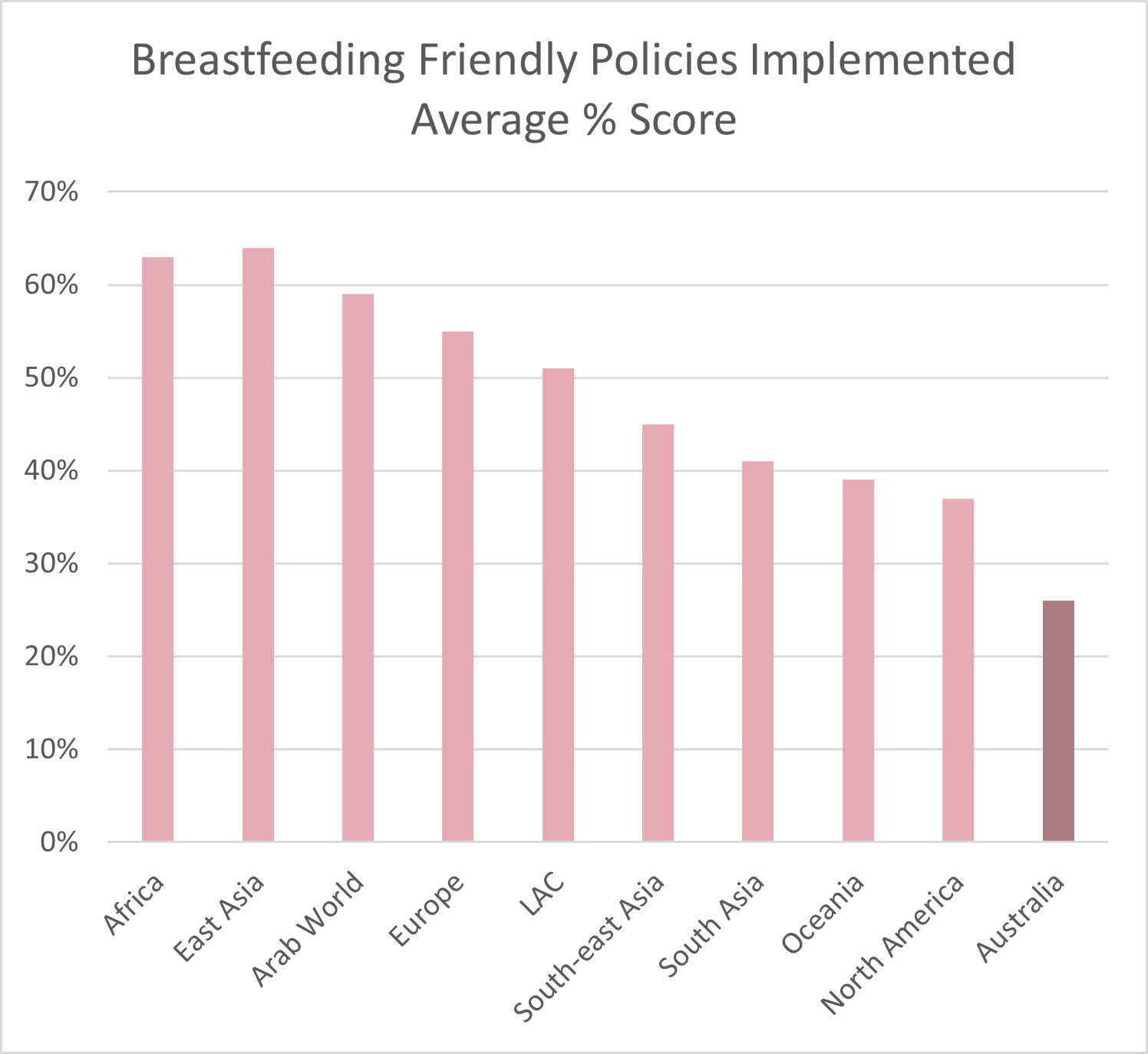 What is the Baby Friendly Health Initiative (BFHI)?

The aim of the Baby Friendly Health Initiative (BFHI) is to protect, promote and support breastfeeding. They do this by accrediting maternity facilities on their implementation of the 10 steps to successful breastfeeding for hospitals and birth facilities, as recommended by the World Health Organization and UNICEF.

Why is this important? The first hour after birth and the first 24 hours after both are incredibly important to successful breastfeeding and having procedures to support these sensitive time periods at the hospital can make a big difference to the long term breastfeeding relationship. Unsurprisingly, a study in 2019 found that the Baby-Friendly Hospital Initiative is a predictor of breastfeeding success in developed countries. (8)

At the current rate we can expect all maternity facilities to be accredited by the year 2120, or in other words, in just under 100 years.

What are the Current Breastfeeding Statistics in Australia?

As of 2018, although 93% of women initiated breastfeeding, only 29% of Australian babies were exclusively breastfed for the first six months of life. (2)

This indicates that solids were introduced at 6 months or later for about half of all Australian Children and that 19% were formula fed, or mixed formula/breastfed until 6 months.

Is Breastfeeding Increasing or Decreasing in Australia?

Breastfeeding rates have not increased in Australia since 2015 based on limited available data. It is estimated that between 2010 and 2015 the rate of exclusive breastfeeding to 6 months doubled from 15% to 30%, however the more recent data collection is on a smaller sample size.

After 2010 there is no comprehensive survey data available. The ABS undertakes a National Health Survey which surveys a small portion of the population extrapolates data from this sample.

What does the Australian Breastfeeding Association do?

How Much Does the Government Provide to the ABA in Funding?

The ABA provides a wide range of breastfeeding support services, including classes, a helpline and live chat support options. They also promote breastfeeding at expos and through social media as well as running breastfeeding conferences for experts.

Unfortunately the number of women reaching out to the ABA for support is declining over time. In 2015 the association received approximately 87 thousand calls to the hotline, compared to 79 thousand calls and live chat messages in 2021.

At the time of writing we were unable to find any analysis on why this might be, or what is being done to change that.

Why can't General Practitioners or other Health Workers provide Support Services for Breastfeeding?

General Practictioners and child health workers are not sufficiently trained in support for new mums. They receive very little breastfeeding education as part of their studies. The most effective means of support comes from trained breastfeeding counsellers (such as the Australian Breastfeeding Association volunteers), or from trained Lactation Consultants. The ideal method for support is face-to-face visits where a professional can observe a feed.

Why Do Women Stop Breastfeeding?

Lack of support is the core reason most women stop breastfeeding. There are various issues new mothers face including difficulty attaching, concerns about milk supply levels and worry about unsettled babies that were cited in the Australian national infant feeding survey (by parents who stopped breastfeeding entirely before 6 months).

Most of these issues can be resolved with reassurance, education and trouble shooting by a trained professional.

Anecdotally, many women are also undermined by advice from well meaning family and friends suggesting they 'just use formula' when they express their concerns and fears rather than being able to encourage and help the mother find trained support to work through the issues.

Yes. Women who have a c-section have a higher proportion of breastfeeding difficulties (41%) for a variety of reasons. (11)

Australia has one of the highest caesarean rates in the world. In 2019 36% of all women giving birth in Australia had a caesarean (AIHW 2021), compared to the recommended rate of 10 to 15% (WHO Statement on Caesarean Section Rates). (10)

A medicalised birth means the woman will need more support to successfully establish and continue breastfeeding, especially in the sensitive 1, 24, and 48 hours after birth. The ability to identify mothers likely to need additional breastfeeding support, and then provide this additional support is currently not provided in the Australian healthcare system.

What Percentage of Mothers Breastfeed in Australia?

As at 2017-18, it is estimated that 93% of mothers initiate breastfeeding at birth, however only 29% or 3 in 10 continue breastfeeding exclusively until 6 months of age.

Highlighting the importance of support in the newborn stage, the data also showed that 64% of babies in 2 parent families were exclusively breastfeeding at 4 months of age, compared to only 46% in single parent families. (2)

What are the Breastfeeding Rates in Australia?

The rates of Australian children receiving breast milk as well as those exclusively breastfed have remained fairly consistent since 2014-15. 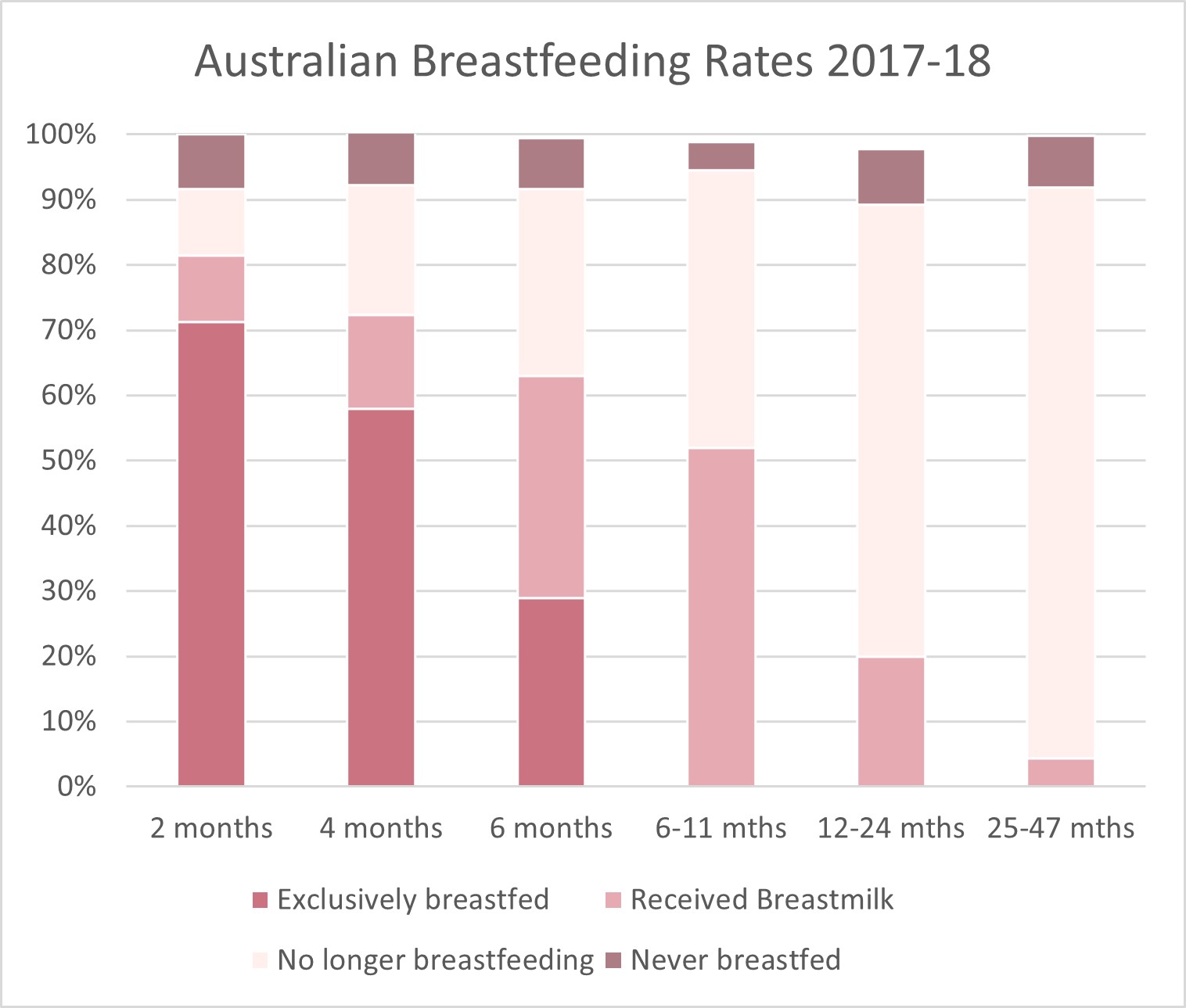 How Can Australia Improve Breastfeeding Rates?

We know that the key driver to improve breastfeeding rates is appropriate support to women. The majority of women initiate breastfeeding, and then stop due to lack of support and education to help them overcome the issues they encounter.

Australia already has the framework in place to support new mums with the ABA, the BFHI and lactation consultants across the country. Now we need to:

At What Age is Breastfeeding No Longer Beneficial?

Breast milk continues to provide energy, protein, calcium, essential fatty acids, vitamins A, B12 and C, as well as 76% of folate requirements for toddlers and young children of all ages. Breast milk also provides custom made antibodies to help boost your child's immune system against any infections or viruses your child encounters. It may also assist with allergies and asthma.

These benefits do not 'stop' working at any point, and breast milk is dose dependent, which means the more you get, the better it is (7). In fact, some adults fighting cancer and other illnesses look to breast milk to help boost their immune system. (9)

There is evidence to suggest that the longer a child is breastfed, the more intelligent they are. Breastfeeding an older child can also assist with emotional regulation and provide comfort and stability.

Anthropologist Katherine Dettwyler believes that the natural age of breastfeeding is between 2.5 and 7 years. 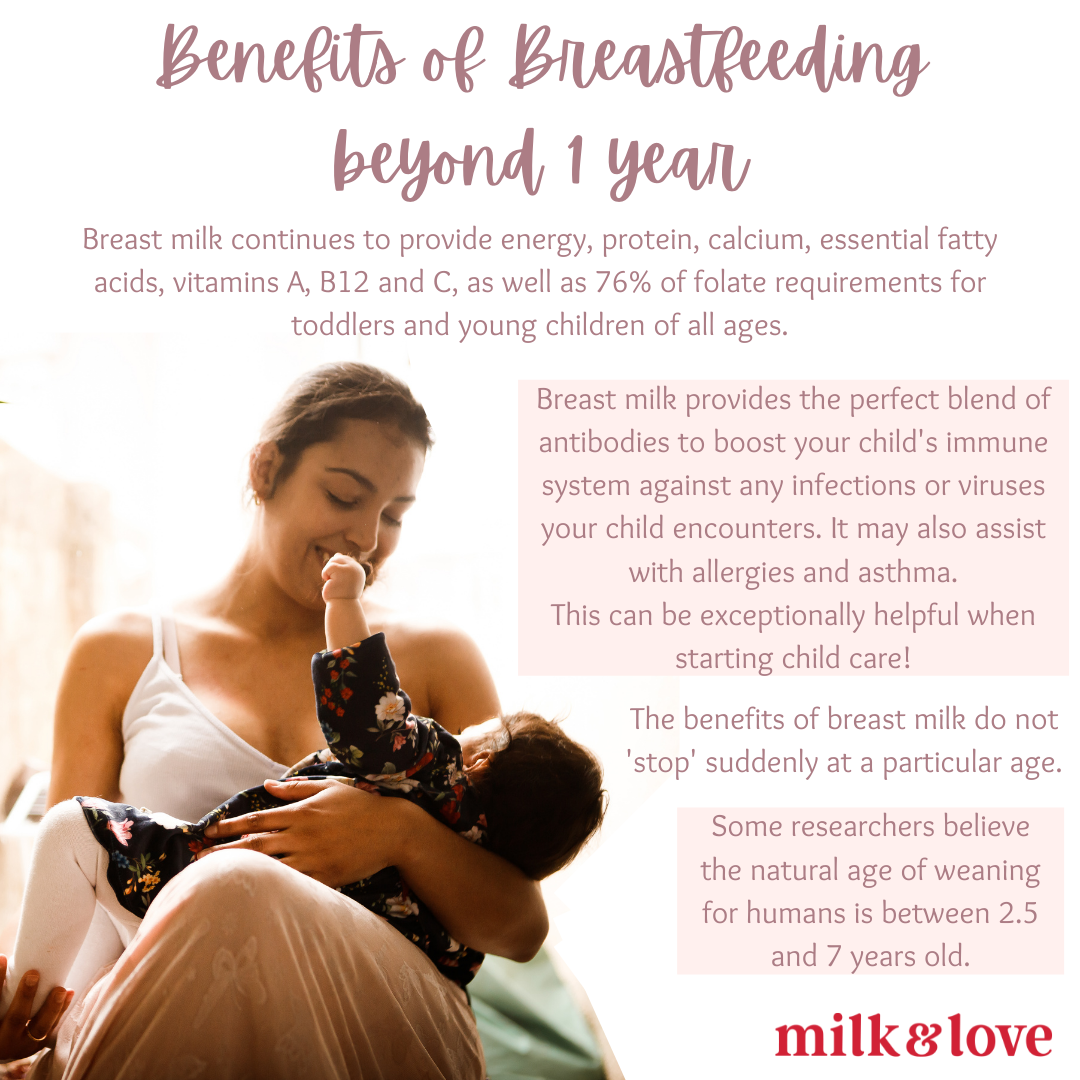 Yes. Exclusively breastfeeding improves health outcomes for both babies and mothers. UNICEF estimates that improving breastfeeding rates around the world could save the lives of more than 820,000 children under age 5 every year, the majority (87 per cent) under 6 months of age.

Yes. Breastfeeding supports healthy brain development, and is associated with higher performance in intelligence tests among children and adolescents across all income levels. A cohort study in the US in 2013 found a causal link between breastfeeding and IQ at 7 years of age. (14)

In addition, a 30 year study of 6,000 children in Brazil indicated that breastfed babies were more intelligent, had spent longer at school and earned more than those who had not been. And the longer they were breastfed as a baby, the better they tended to be doing. (4)

What are the WHO Guidelines for Breastfeeding Duration?

The World Health Organization (WHO), recommends exclusive breastfeeding for the first 6 months of life, and continued breastfeeding until at least age 2.

Exclusive breastfeeding means providing only breast milk to baby, with no formula or solids.

What Percentage of the World is Breastfed?

On average, 4 out of 10 babies are exclusively breastfed in the first 6 months of life.

Which Countries have the Highest Rates of Breastfeeding? 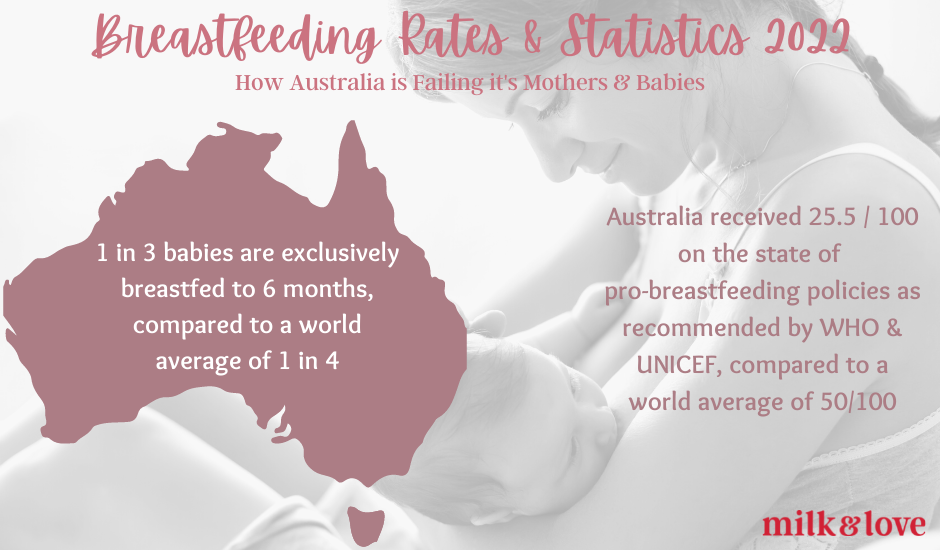 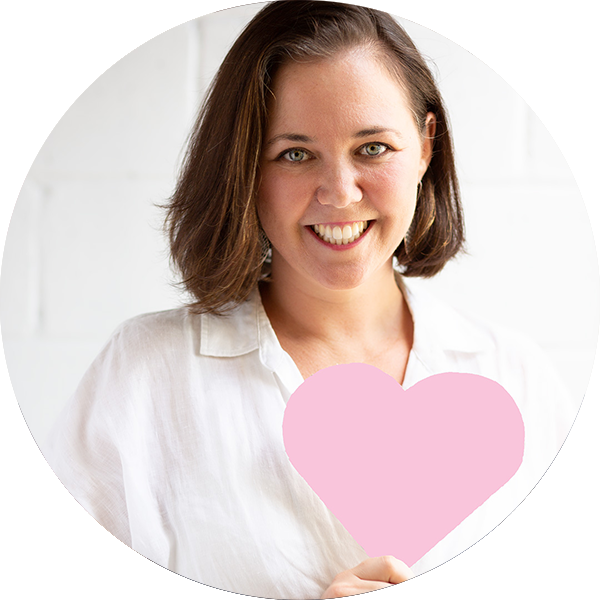 Corryn is a lover of coffee, hugs and sunshine. Mum of 3 and founder of Milk and Love, Corryn loves chatting to new mums and pregnant mums. She has extensive breastfeeding experience, and is an advocate for gentle parenting, cosleeping and looking after Mum's mental health...  read more about Corryn here